The Benefits of Doing Business in Ireland: What the BBC and the G8 Countries Did Not Want You to Hear!

Having a good tax accountant to sort out your taxes saves you time - about 10 to 15 years in fact, depending on the tax offence!! 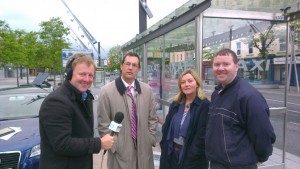 Getting ready to go on air.
BBC presenter Andy Verity with
Conor Healy from Cork Chamber of Commerce and
economists Sheila Killian from university of Limerick
and Seamus Coffey of University College Cork

On a serious note, a BBC Radio crew were visiting Cork ahead of the G8 summit held in Co. Fermanagh this week to report on issues that have come up because of the publicity created by the US Public Accounts & UK Select Committees on the apparent controversial issue of international tax avoidance. The tax practices of the large tech companies located in Ireland has brought the international media spotlight to shine on our country.

I was kindly invited by the BBC team to speak on their morning show, ‘Wake Up to Money’, broadcast live from the National Monument on Grand Parade in Cork City; and then on the '5 live Breakfast' show later that morning, broadcast from outside Apple Computers EMEA HQ .

The BBC production team wanted me to contribute due to our firm’s established practice with international clients. They wanted a contribution on how to set up an international business in Ireland, how to maintain it, what rules govern the tax and legal environment; and most importantly what are the advantages and disadvantages of setting up a business in Ireland and what are the other reasons that Ireland has been so successful in continuing to attract multinationals and other SME businesses.

The show is a fast moving and sharp production and there is no time for pondering on questions asked, debating or any casual chat!

I managed to address some of these issues in the short time allotted, which was very much under the control of presenter, Andy Verity, a guy who between shows admitted to me, ‘He was not Jeremy Paxman.' 'Just as well', I replied!  I attempted to present the many benefits in locating here as WE in Ireland know.....but sometimes you get the feeling that the media just want to hear what they wanted to hear, or their listeners want to hear...LOW CORPORATE TAX ….TAX.....TAX...TAX!

When you get the feeling that they will present their story as they had planned, and without divergence to the real facts, you start to feel that you are trying to ‘break through a brick wall’. Nevertheless, as it seemed to me in recent weeks that the ‘super powers’ of the world economy have decided to gang up on Ireland, I felt duty bound to defend our systems as strongly as possible! I couldn't cover all the points in the couple of minutes that I was on the show, but it's important that you consider what the media is not reporting about these businesses.

1) Even if some of the tax practices of the multinationals seem overly aggressive, they are all done within the tax and company laws of Ireland,  nothing illegal is carried out and yes they do pay 12.5% on their taxable profits, after LEGITIMATE DEDUCTIONS in the form of expenses and royalty payments for the rights to use the Intellectual Property licensed to it by the IP owners. These payments would be set on a commercial arms length valuation basis.

2) The effective rate of 2% tax that has been thrown around is caused by politicians (yes you know the ones i mean, the public servants known for their professionalism, honesty & ethics!), media & economists by tinkering with what the companies can legitimately claim and presenting the tax rate paid here as a percentage of earnings before these LEGITIMATE DEDUCTIONS. This results in the lower tax rate below 12.5%!

3) These companies do have a substantial amount of economic activity here via staffing, business location, indirect investment in local property -- and all multinationals pay a huge sum in direct and indirect taxes.

4) These large corporations attract a lot of smaller businesses to the country that are doing business with them and need to have operations nearby.

5) Irish businesses get a chance to do business with, network with and learn from these multinational companies to improve their own export potential.

Margaret Hodge’s comments about Ireland and those UK Select Committee hearings are unfathomable, in that she doesn't see what Ireland gets out of these multinationals locating here?!!  Well Ms Hodge, let me explain & how long have you got!  In fact, her comments and her manner in addressing senior officials at these companies prove the other points surrounding the benefits of doing business in Ireland as noted below:

a. Ease of doing business - Ireland is continually ranked high in various ease of doing business reports. In practice this means that we can reach decision makers more directly, we are less bureaucratic than other countries in the EU & we have a pro business/FDI state with good accessibility.

b. Lower capital outlay costs for setting up a company. In Ireland the minimum share capital requirement is € 1 but in some EU countries it runs into thousands of Euro

c. We have a strong entrepreneurial spirit.

d. Costs of property, staff and services is lower than running a business in a larger EU country.

e. We have a resourceful pool of young, educated, English speaking staff.

f. We are the only country in the Eurozone where English as the primary language.

g. Quality of life is high.

Some reports have suggested that the USA have an effective corporate tax rate of 13% (after various tax deductions) which is substantially less than their headline rate of 35% (and less than the average OECD rate of 16%) though these issues never seem to be discussed publicly. It seems that the USA want their tax money no matter what!

Each country has control over its own fiscal policy and the US & UK could lower its corporate tax rate should they wish to do so. Though i believe the reason they have not done so has something to with the other benefits that doing business in Ireland presents that maybe they can’t access.

As the 2013 G8 Forum falls back into history and the media turns its focus to another topic, what will people remember about these reports?

Tagged With: News, Setting Up a Business in Ireland